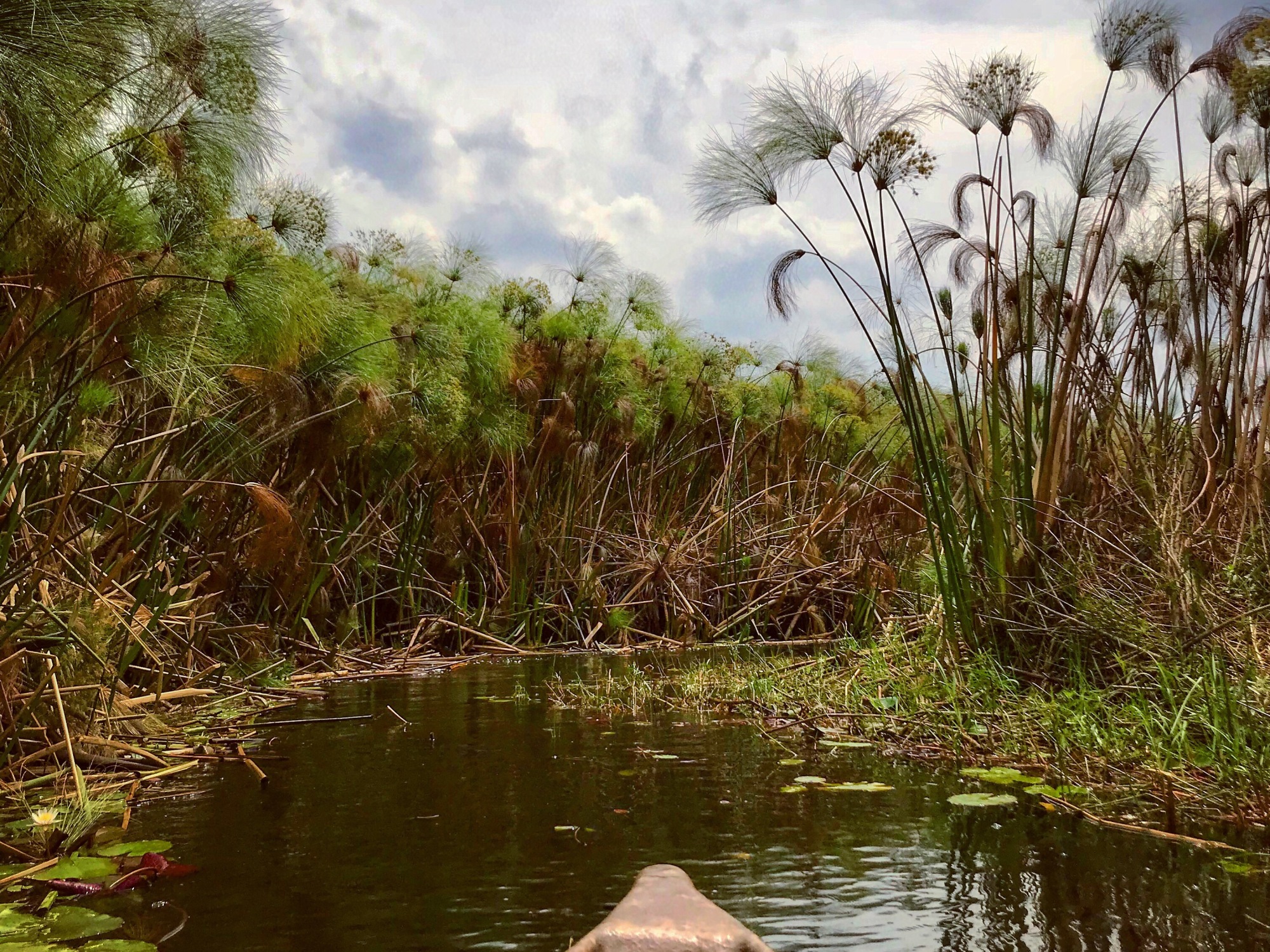 The Caprivi Strip (as explained in our last post) resulted in us crossing the border again to head to our excursion on the Okavango Delta. After crossing the border that morning we drove 115 kilometers to where an army truck picked us up. We spent 12 kilometers on gravel road (only accessible by a 4×4) to get to our campsite, Nguma Island Lodge, which was made up of permanent tented camps. For this excursion all members of the group were part of our “adventure family” and camping, whereas on the normal tour about half the group stayed in accommodation during our stops. That afternoon we decided to join a guided nature walk, which was more of a walk around the property. The tour guide was very slow with his delivery (perhaps he was on Africa time). We were educated on how termites help vegetation and the benefits of elephant dung (apparently it can be burned to keep mosquitoes away). It wasn’t the best experience of our tour as we endured heat of high 30s for an hour whilst inspecting elephant dung and termite mounds. When we got back to our camp we then headed on a boat to explore the Delta. This trip didn’t offer the wildlife like we experienced at Chobe River, but the vegetation and waterways were interesting to explore. The reeds along the bank often camafloged various crocodiles and various species of birds. Post sunset we joined another Nomad truck (headed in the opposite direction) for dinner at the lodge.

We arose early to clear skies, which was a relief as it rained intermittently during the night. After breakfast we headed off again on the boat into the Delta, spotting crocodiles as we travelled to meet our polers and mekoro (a wooden hollowed out canoe, iconic mode of transportation on the Delta). Our group loaded into mekoro, each carrying two people with one poler, and headed along the Delta. Our poler provided us a rough ride compared to the other boats as we played bumper cars with the banks. It was also dry season so at some points you could feel the mokoro scraping the bottom on the Delta (or maybe it was all the weight we’d put on!). We arrived at an island to disembark, have another nature walk and eat lunch before heading back in the mokoro. When we arrived back at the campsite you could smell the rains on their way, and sure enough that night the heavens open up! We were lucky to be at the tented campsite as the tents were definitely more waterproof than the Nomad tents we had be using every night and packing up a wet tent isn’t fun.

It was still raining when we woke the next morning (glad that we had our time on the Delta the previous day!). Initially it was a nice reprieve from the heat, but you quickly get tired of feeling damp and having everything be wet! After breakfast we loaded into the army truck to be reunited with our tour guide and truck. As we headed to the city of Maun, the rain finally came to a stop. At our campsite J creatively found an awning to set up our tent under, which acted as cover and structure for our tarp (of course not a drop of rain fell that evening). That afternoon we joined 4 others on a plane ride over the Okavango Delta. As we had only seen a very small section of the Delta the plane ride was amazing to put expansiveness of the Delta into perspective. Surprisingly the reeds did not extend that far from the banks of the river. We also saw elephants, hippos and buffalo from above. J sat as a co-pilot and was super excited as he got to fly the plane for approximately 5 minutes over the Delta (J may have a new hobby).

Botswana is known for its free range cattle, therefore foot and mouth disease is a big concern. During our border crossings we had to step in disinfectant (which looked more like a pan of muddy water). We came across a few more of these along our drive to our next campsite. At one stop they even checked all the compartments in the truck and searched bags for extra pairs of shoes (as all footwear was to be disinfected). Even though the day was more of a travel day, J showcased his sprinting skills during a highway race versus our driver and cook, easily beating them both. We also met some San people during the evening, who showcased some of the traditional songs and dance. The San people are indigenous hunter-gather people, whose lifestyle has unfortunately had to adapt to the impact of tourism to the area. The individuals we met were from the Kalahari and a group of them stay near the lodge for 6 months for tourism. 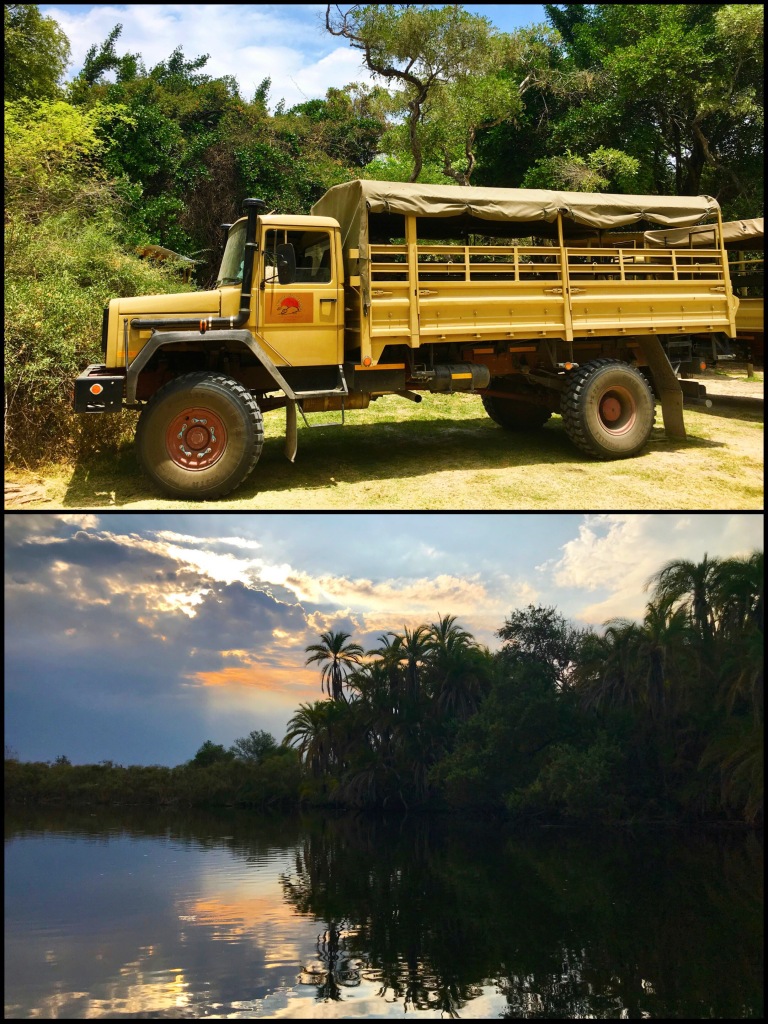 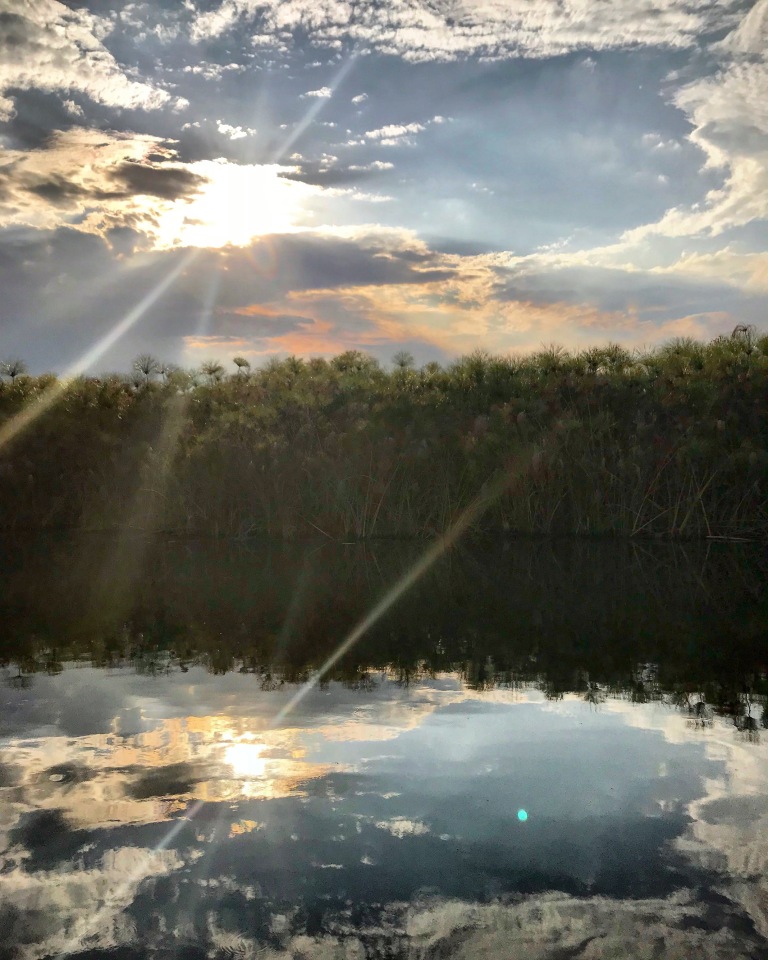 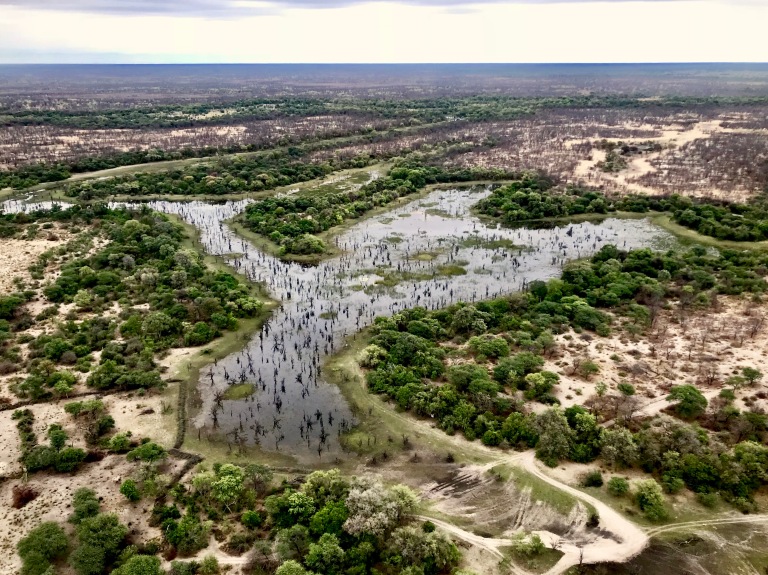